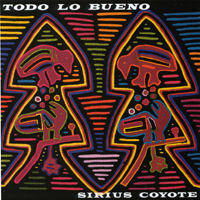 The larger band takes a turn at 12 original compositions from its touring repertoire. More instrumental pieces than previous recordings. Styles of songs range from jazz, rock, folk, and a variety of rich spiritual and dance tunes. Two of the tracks are from outstanding recordings of live performances at the Sunken Garden Annual Poetry Festival in West Hartford, CT in 2000.

IN THE LAND OF THE NAHUATL: Sirius Coyote with guests

Sirius Coyote's first CD release. A compilation of re-recorded material from their previous cassette releases plus new compositions from their performing repertoire. Combination of tradirional styles and tunes based on the sounds of ancient American instruments. This record is a manifestation of the fusion of sounds from different cultures of the Americas resulting in an exciting and unique musical form. A musical journey through original, ceremonial, popular dance tunes and revolutionary songs of Latin America.

Children tunes from Latin American. First production to come out of Dennis' new 16 track in-house recording studio. Mostly songs and game-songs that Giovanni grew up with in Venezuela. All of them previously unreleased by the coyotes. It is illustrated with children’s art-work cut and pasted from the many letters receive from their school programs. Liner notes include all lyrics in Spanish with English translations.

Build over 50 Folk instruments to shake, rattle, pluck and bang! Many of the projects are simple to construct using not only traditional materials such as wood, gourds, and bamboo, but every day objects you probably have on hand and are readily available, from tin cans to PVC pipes. $14.95

Add $1.50 per item for shipping and handling and 6% CT sales taxes.